Dementia patients at Basingstoke and North Hampshire Hospital have been given a comforting gift thanks to the generosity of a local craft group. 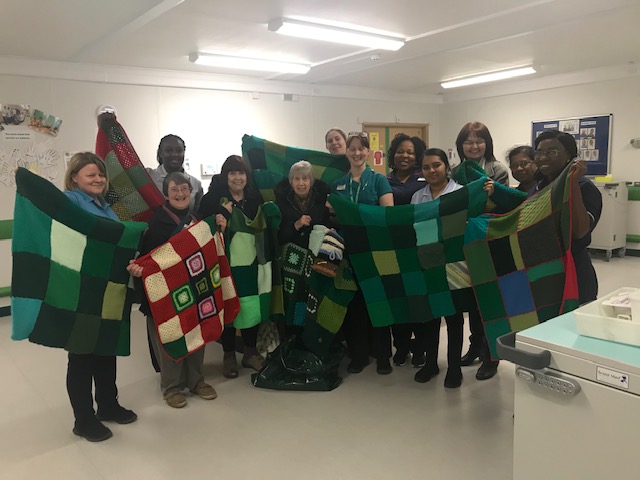 The ‘Chineham Crafters’ group from Christ Church, Chineham, were delighted to create a Chineham Community Crafted Christmas Tree out of 1,700 green knitted and crocheted squares.

The Christmas creation, which was displayed in Christ Church, in Reading Road, looked fabulous – but when the Advent season was over, the tree was dismantled and the group wanted to see if they could do more good with the squares.

Mary Boys, from the group, who is a dementia champion, said: “We decided to make them into blankets, and set about sewing the green squares together, making them into attractive patterns and edging them with different coloured wool.

“We then contacted the dementia team at Basingstoke who said they would be interested in receiving the blankets for patients.

“They were delighted and took us on a tour of the wards (March 3) where we handed over blankets to the matrons and to some of the patients. 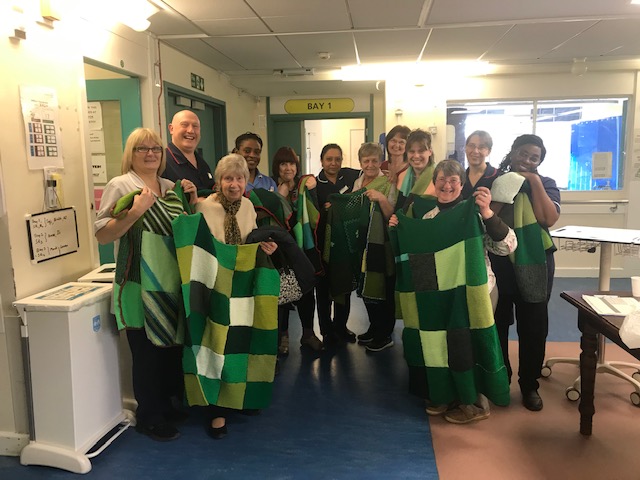 “They were so grateful, and it was heart-warming to see the reaction on the faces of patients after receiving a gift of a warm, soft blanket that they could keep and take home with them when they left hospital.”

Mary added: “Thank you to everyone who was involved in creating the Chineham Community Crafted Christmas Tree, and with putting the blankets together.  All your hard work has made a lot of people very happy.”

Jeminat Abdul-Salam, deputy sister from the Hampshire Hospitals NHS Foundation Trust (HHFT) dementia team, said: “The dementia team and patients were grateful for, and delighted by, this kind and generous show of support. It particularly means a lot to all of the patients who received one of the blankets.”

HHFT’s dementia team works across the trust, which delivers one hospital service across multiple locations including its own hospitals, Andover War Memorial Hospital, Basingstoke and North Hampshire Hospital, and Royal Hampshire County Hospital in Winchester.

Picture caption: Members of the ‘Chineham Crafters’ present the blankets to the HHFT dementia team. Photographs were taken on March 3 before the Government instructions on physical distancing came into force.