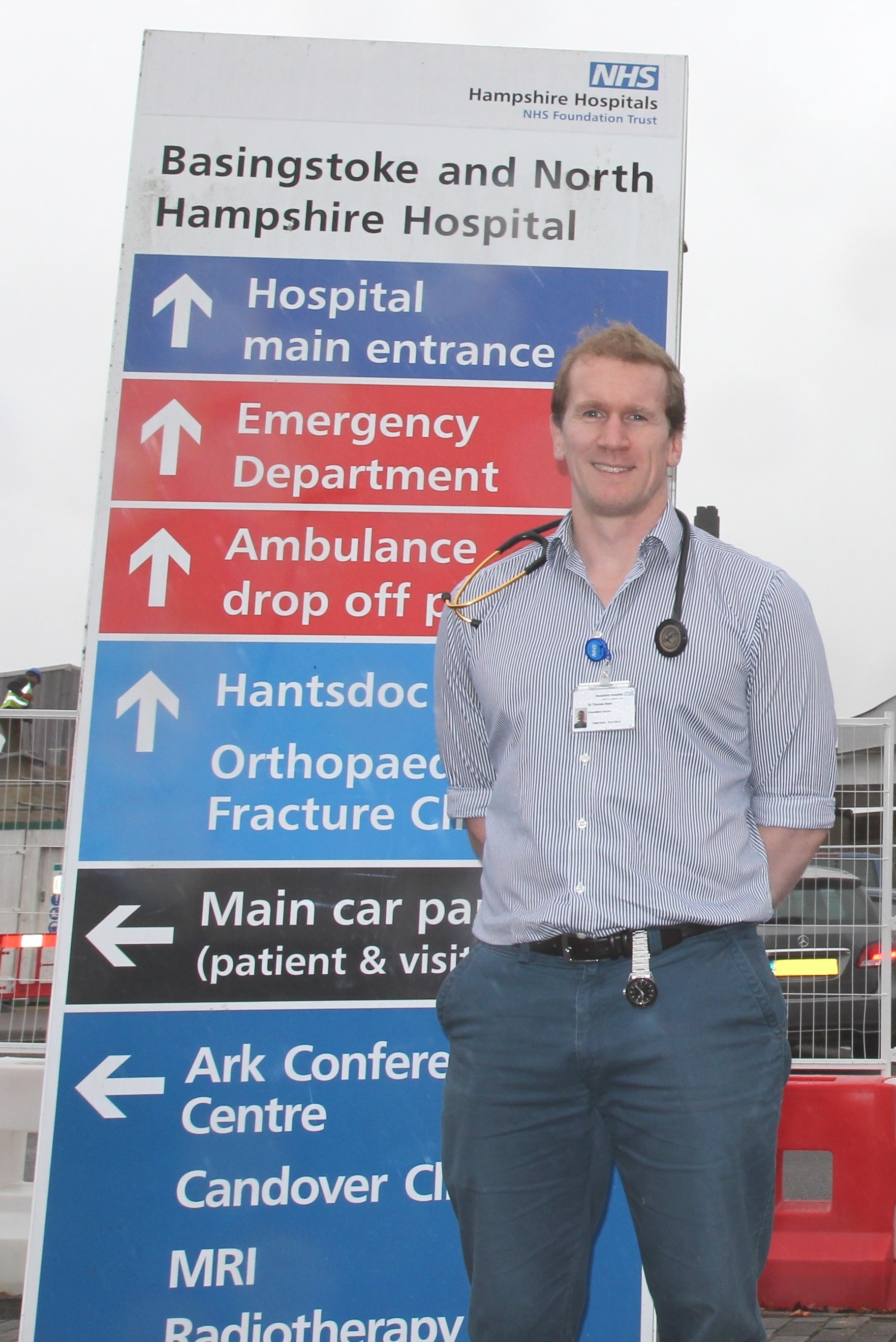 Rather than treating patients at Hampshire Hospitals NHS Foundation Trust, Dr Tom Rees could have been a member of the England rugby squad preparing for the World Cup final this weekend.

12 years ago, he was a young member of the squad that also reached the final in Paris, looking ahead to what he hoped would be a long career that would ideally end with him retiring as a world champion after this World Cup.

Injuries put paid to those dreams, forcing him to retire from playing at just 27, and instead of running out for England in Japan, Tom is now in his second year as a qualified doctor at Basingstoke and North Hampshire Hospital.

“When I was setting out on my rugby career, I used to imagine what it would look like when I finished playing,” Tom, who is now 35, said. “I thought that this World Cup might be my swansong. That we could win it and I could retire on an amazing high.

“You always wonder what might have been, but what I do know is that had I still been playing, or even if I’d been able to carry on for a few more years, it would be less likely that I would ever have the career I have now, so I have to be grateful for that.”

After impressing for club side Wasps, with whom he won the European Cup and Premiership, Tom burst onto the international scene in 2007. Aged just 22, he forced his way into the England team during the Six Nations and started the 2007 World Cup as first-choice openside flanker for the defending champions, scoring his only try for his country in their opening fixture against the USA.

He seemed to have the sport at his feet, being touted as a future England captain, but a shoulder injury kept him out of the game for more than a year. He fought his way back to fitness, only to immediately suffer the serious knee injury that forced him to finally call time on his career in March 2012.

Tom had already decided to pursue a career in medicine by that point and he embarked on a six-year medicine course at Imperial College London later that year. Fast forward six years and fate conspired to bring him back to Basingstoke, the town where he had grown up, as a qualified doctor.

He said: “I wanted to work in the Wessex Deanery because my wife, who is also a doctor, was already working in the area, so then it was just a case of looking at the rotations and seeing which areas I wanted to experience during my first two years as a doctor. One stood out and that happened to be at Basingstoke and North Hampshire Hospital.

“In a sense, I felt like I was coming home. My parents still live locally and I know the town, so it has definitely made it easier, and I’m really enjoying working here.

“It’s hard work and can be very mentally tiring, but most days I get up and am looking forward to doing my job. It is very rewarding when you see patients getting better because of what you and your colleagues are doing and there is a real emphasis on working as a team, which with my rugby background, I really enjoy.

“Most people are blissfully unaware of what I did before I was a doctor, but I have had a couple of patients recognise me and ask for selfies, which is good fun. What’s not so much fun is that one of my colleagues used to play rugby for Basingstoke RFC as a youngster and he has a picture of me presenting him with an award when I returned to the club for a prizegiving, which makes me feel really old!”

During his time at Basingstoke hospital, Tom has completed rotations in the cardiology, colorectal surgery and orthopaedic trauma departments. He is currently working in paediatrics and will also spend time in the emergency department and general practice over the next few months.

He has a huge choice to make early in 2020, choosing which area he would like to specialise in.

“It’s a big decision because it’s what I’ll be doing for the next 30 years,” Tom said. “I didn’t come into my time as a foundation doctor with any preconceptions about what I wanted to do and I enjoyed my rotations in orthopaedics and cardiology, but I am the sort of person who tends to enjoy what I am doing at the time, so I’m finding it hard to look beyond the here and now.”