It was celebration time for a group of students graduating after spending the last year on internships at Hampshire Hospitals NHS Foundation Trust.

10 people aged between 19 and 21 with learning disabilities, learning difficulties and/or autism joined the team at Hampshire Hospitals in September last year, giving them experience of a working environment and helping them to develop confidence, independence and transferable skills to take forward in their working lives. 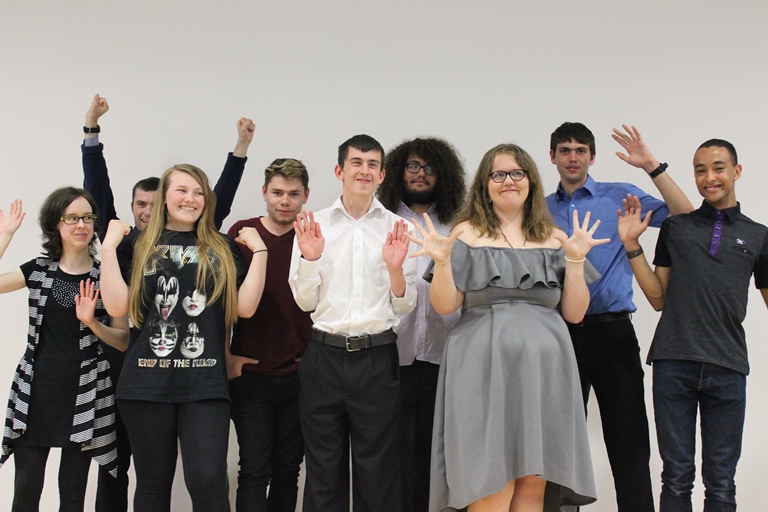 After spending the academic year working alongside hospital staff in a variety of departments, including speciality medicine administration, radiology and support services, the young people have come to the end of their placements and are now better equipped to find permanent jobs.

There was even more cause for celebration as it was revealed that four of the 10 interns have already been offered a permanent role at Hampshire Hospitals, and that the Project Choice team are working with teams within the hospitals to explore employment opportunities for the remaining interns.

20 year-old Shannon is now taking on a new challenge within the Trust after being offered a job as an activities co-ordinator following her successful internship in the discharge lounge. Over the past year, Shannon has supported patients who are ready to leave hospital, and her new role will see her working with a team to develop and run activities to help keep patients engaged and active while in hospital.

Shannon, who also spoke at the graduation ceremony, said: “Since starting with Project Choice, my confidence has grown immensely, and the team have all helped me to believe in myself and been so supportive.

“It feels amazing to now have a job at the end of this experience. It’s opened a lot of doors for me and I’m really excited about my new role.”

Hampshire Hospitals is one of just 10 Trusts across the country – and the only one in Wessex – taking part in the national Project Choice programme, which is run by Health Education England.

Project Choice aims to bridge the gap that people with learning disabilities, learning difficulties and/or autism experience between education and employment. It works with organisations to find suitable placements and supports both the interns and the hosts by providing training. The project aims for  interns to be work ready and they are supported to make a transition to paid employment, apprenticeships or further training at the end of the programme.

The interns experienced up to three placements during their time with the Trust, working with Hampshire Hospitals teams for four days each week during academic term times, and spending the fifth day of each week learning about work skills and improving their maths and English.

Teams at Hampshire Hospitals are now getting ready to welcome the next cohort of 12 Project Choice interns, who will be joining a variety of teams including the emergency department, pharmacy, therapy services and clinical coding in September.

Members of staff from across the Trust embraced the new additions to their teams, and noted the incredible energy the interns brought to the departments they worked with. As well as being a helping hand, some staff had the opportunity to mentor the interns, and received special training to ensure the success of the programme.

Alex Whitfield, chief executive of Hampshire Hospitals, which runs hospitals in Andover, Basingstoke and Winchester, attended the graduation alongside Trust chairman Steve Erskine. She said: “Last September we were delighted to offer placements to a group of young people who have so much to offer but sometimes find it difficult to realise their potential.  Over the last year they have been absolutely brilliant and have become important members of our HHFT team.

“We have learnt as much from them as they have from us, and I want to add my personal thanks to each of our Project Choice interns for the year they have spent with us, and add my congratulations for all they have achieved.

“The NHS is a diverse organisation and we wish them well in their future careers as some of them move to other roles within the hospitals.”