Staff across Hampshire Hospitals NHS Foundation Trust (HHFT) were celebrated for the compassion, dedication and quality of care they provide to their patients at the trust’s seventh annual WOW! Awards Gala Ceremony.

From porters to physicians, Hampshire Hospitals staff receive over 300 WOW! A 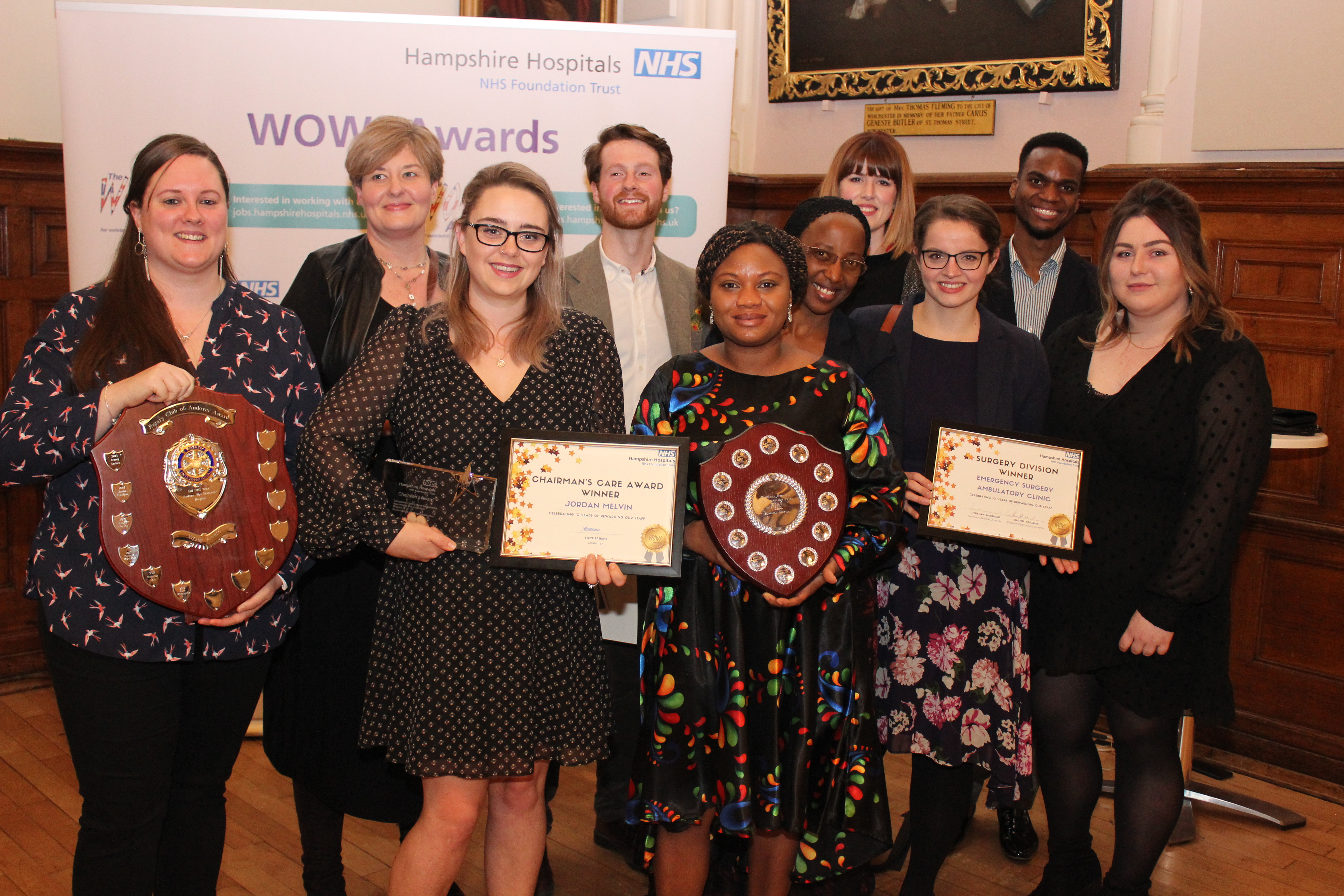 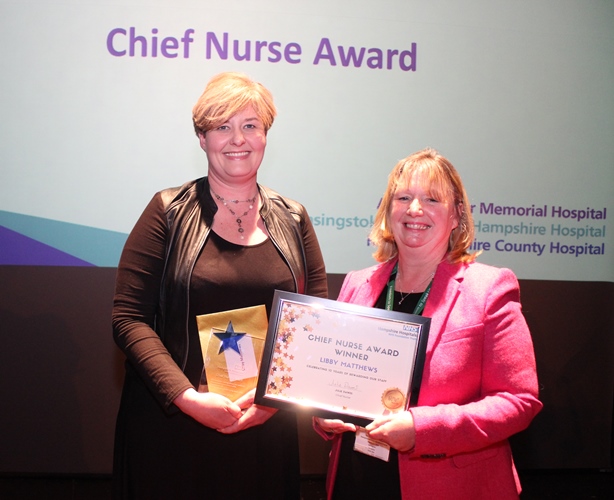 Andover midwife Libby Matthews was the deserving winner of the Chief Nurse’s Award. Over the years, Libby has supported a patient and their family through multiple miscarriages, and has been a constant source of guidance through an incredibly difficult time.

The nomination described how Libby has gone above and beyond to provide expert clinical care and advice often outside of her working day, and, when necessary, the emotional support the family needed. The nomination from the family described how during the recent loss, Libby “was so calm and reassuring, and gave me the strength I needed to keep putting one foot in front of the other.”

Libby said: “It’s been a privilege to be able to support this family at such a heart-breaking time in their lives. I didn’t think twice about ever being there for them, regardless of the time of day or my shift pattern, and I think that anyone in my team would do the same. We all hope that when something difficult happens we have someone to turn to, and I am glad that for them, that person was me.”

The team behind the Emergency Surgery Ambulatory Clinic (ESAC) at Basingstoke hospital picked up the surgical divisional award, after the team were nominated by a patient on the very first day the unit had opened.

The nomination spoke about being treated with “competence, care and compassion by all members of the nursing team” and wanted the hard work of the team to be recognised on what was a busy first day providing a new service to patients. 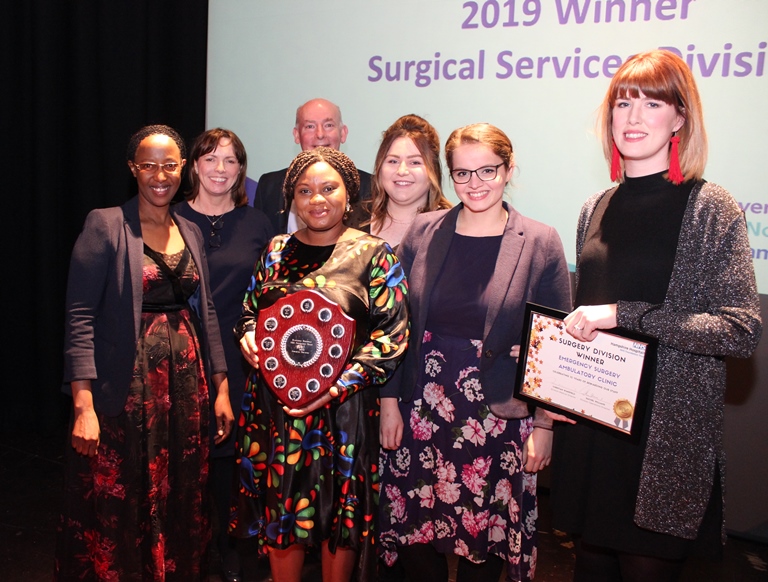 Hayley Blandford, clinical matron for ESAC, said: “2019 was a big year for us and the whole team have worked incredibly hard to get the service up and running, putting patients at the centre of everything we do. We are all really proud of the care we provide, and it feels fantastic to have won the divisional award for 2019 – the perfect way to end our year!”

Jordan Melvin, part of the palliative care team in Winchester, took home the Chairman’s Award after going above and beyond to ensure a patient at the end
of their life could spend time in a place that was close to their heart. The nomination said that “it meant the world” to the patient, who “lit up with happiness” whenever he spoke about the day.

At the time of the nomination, Jordan was a healthcare support worker for the homecare team, and went the extra mile to work with the district nursing team to co-ordinate getting the correct equipment in place. 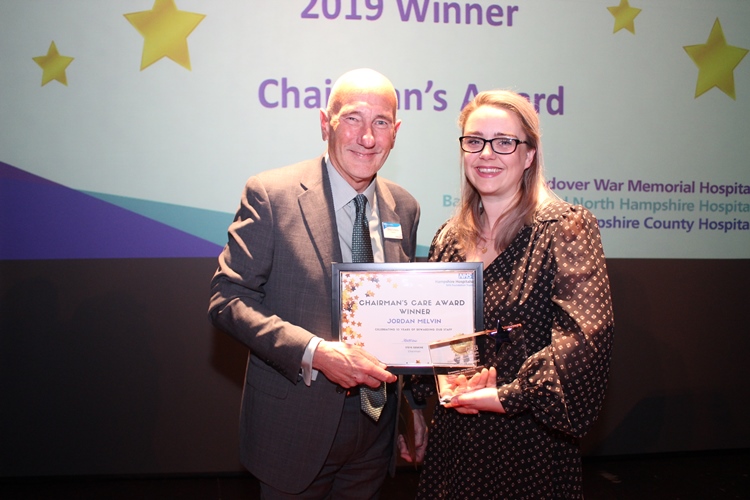 Jordan said: “I absolutely love the job that I do. Every day I know that I am helping to make a difference to a patient and their family, so to have won an award is really surprising but a great feeling. Going the extra mile for our patients is part of what makes the entire team so special, and I know I am not alone in going above and beyond for our patients.”

Other winners included porter Robert Thompson, who showed incredible compassion to a family, the sterile services team, who worked tirelessly to solve a problem, and emergency nurse practitioner Ruth Willoughby for her fantastic work in setting up a pathway for patients with mental health problems to ensure they receive the care they need.

Over the course of 2019, the Trust received 3,712 WOW! nominations for staff who had made a difference to someone by exceeding expectations or going the extra mile.

Steve Erskine, chairman of Hampshire Hospitals NHS Foundation Trust, said: “It’s truly humbling to hear just some of the ways our staff have made a difference to our patients in the last year.

“Hampshire Hospitals is full of talented, hardworking, compassionate people and it’s a privilege to work alongside you all, thank you for all that you do.”